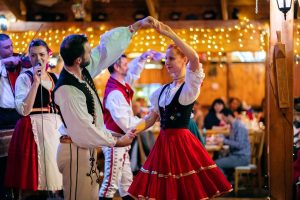 Karlovy Vary (Carlsbad) is a spa town in the west Bohemia region of the Czech Republic. Its numerous thermal springs have made it a popular resort since the 19th century. The riverside spa district is home to several colonnades with columned walkways. The modern Hot Spring Colonnade houses the Pramen Vřídlo geyser, which spouts up to 12 meters high.

It covers hotel accommodation in 4* hotel Top in Prague with Half board service or in Crystal hotel in Prague.

Important note! Only our organization has the right to sell the festival and the maintain hotels for this festival date…

Participation Fee does not include: